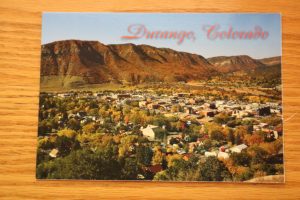 We stayed at the Westerly RV park located outside of Durango, Colorado in between mountains.  Across the street was a hot springs spa called the Trimble.  It’s Colorado’s only geothermal waters, day spa and is open all year.   George and I watched some women in the RV  park walking around in robes and flip flops. We thought what the heck?!  We discovered they were going to the hot springs which was a 30 second walk across the street. So we put on our suits and jackets and flip flaps and moseyed  on over.  Cook, our RV host gave us  a half off coupon to the spa and for the two of us it was $18.00. They had a hot springs pool and also the biggest heated outdoor pool around.  The hot springs pool was divided into two parts. One end was 103 degrees and the other end was 107 degrees.  We sat in the 103 degree  side first, then made our way to the hotter side, it was so  breathtaking looking up at the mountain and blue sky sitting in this pool, wow! It was November and here we were outside in our bathing suits relaxing in the hot springs. Talk about  the life of Riley.

The next day we headed to downtown Durango, it is a long narrow town butted up against the mountains with people walking to work with their leather satchels.  The homes are quaint and so is main street. We stopped and had lunch  at the Fired UP Pizza place, best pizza we had ever eaten because it was made in a wood fired oven and you can watch them make and fire the pizzas. Very inexpensive too. We also stopped in at the Four Leaves Winery and did a wine tasting, yummy!  The Durango & Silverton narrow gauge railroad station is located downtown too. It was on hiatus while we were there, so we will return later to take the passenger train and the enjoy the round trip to Silverton along the spectacular Animas River. Durango is a little treasure in the southwest corner of Colorado! 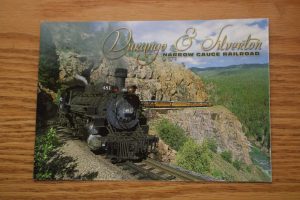